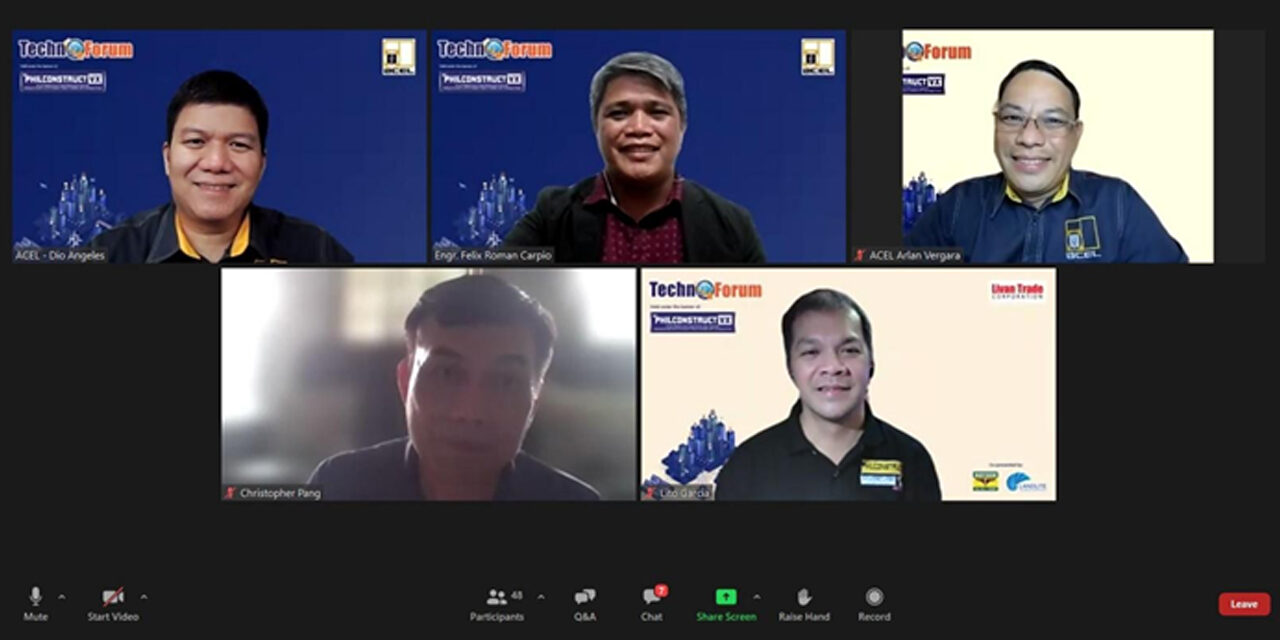 The technical seminars known as “technoforums” conducted by the Association of Carriers and Equipment Lessors (ACEL) that have become popular features of the annual Philconstruct event continue to be top draws even when presented online. This was clearly demonstrated at the 4th Philconstruct VX that was held on November 4-7, 2021 where ACEL offered two such seminars.

The first one, entitled “3D Construction Technologies in the Age of Digitalization,” attracted 152 attendees. Held from 10:15 AM to 12:30 PM last November 6, it was conducted by Nerick S. Gamo, SITECH Philippines general manager, and was moderated by Arlan P. Vergara, ACEL public relations officer and RMD Kwikform Philippines operations head.

ACEL’s second technoforum which focused on “Soil Compaction and Technology for Paving” was attended by 164 participants. It had Felix Roman Carpio, Monark Equipment Corporation’s paving specialist, as the speaker, and J. Eladio Angeles, ACEL president and Olympic Engineering and Sales Corporation general manager, as the moderator. Held from 2:15 to 4:30 PM on November 6, the session dealt with soil compaction fundamentals – its definition and importance, the forces involved in soil compaction, the factors affecting soil compaction, and compaction technologies for soil compactors. The Association’s technoforums are regular features of Philsconstruct, an annual expo series organized by the Philippine Contractors Association (PCA), with ACEL as co-organizer. Dedicated to the country’s construction industry, this yearly series usually starts with a Luzon leg, followed by stops in Cebu and Davao, and then culminates in a grand expo in Metro Manila which is attended by the construction industry’s movers and shakers. However, because of the COVID-19 pandemic, PCA, beginning last year, decided to hold the event online, dubbing it as “Philconstruct VX” to highlight its being an online gathering. The November event was the fourth leg of this virtual offering.