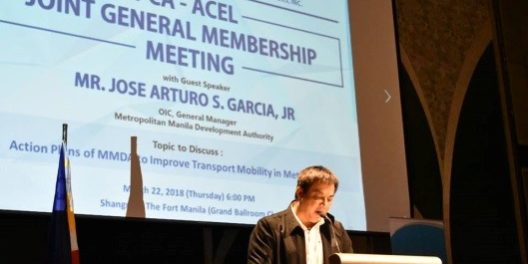 The Association of Carriers and Equipment Lessors (ACEL) teamed up with the Philippine Constructors Association (PCA) to hold a joint general membership meeting on March 22, 2018. The event which generated a huge turnout was held at the Grand Ballroom of the Shangri-La at the Fort at the Bonifacio Global City, Taguig City.

Jose Arturo S. Garcia Jr., the newly designated officer-in-charge general manager of the Metropolitan Manila Development Authority (MMDA), was the meeting’s guest speaker.  In his talk, he discussed MMDA’s action plans for easing the traffic situation in Metro Manila and improving transport mobility in the metropolis.

It will be recalled that the Japan International Cooperation Agency (JICA), in a study it conducted jointly with the National Economic and Development Authority (NEDA), described Metro Manila’s traffic congestion as a serious problem that is causing the economy to incur a productivity loss of around P2.4 billion daily. It further warned that if nothing is done about it, the economic loss will balloon to about P6.0 billion a day by 2030 and the traffic situation “will become a nightmare.”

This nightmarish situation is, in fact, already happening based on the Global Driver Satisfaction Index from Waze which ranked Metro Manila as having the worst traffic in the world. The conclusion was culled from data gathered from 50 million users in 32 countries and 167 metro areas that put Manila dead last. On a scale of 1 to 10, with 1 described as “miserable” and 10 being “satisfying,” Manila scored a 0.4.