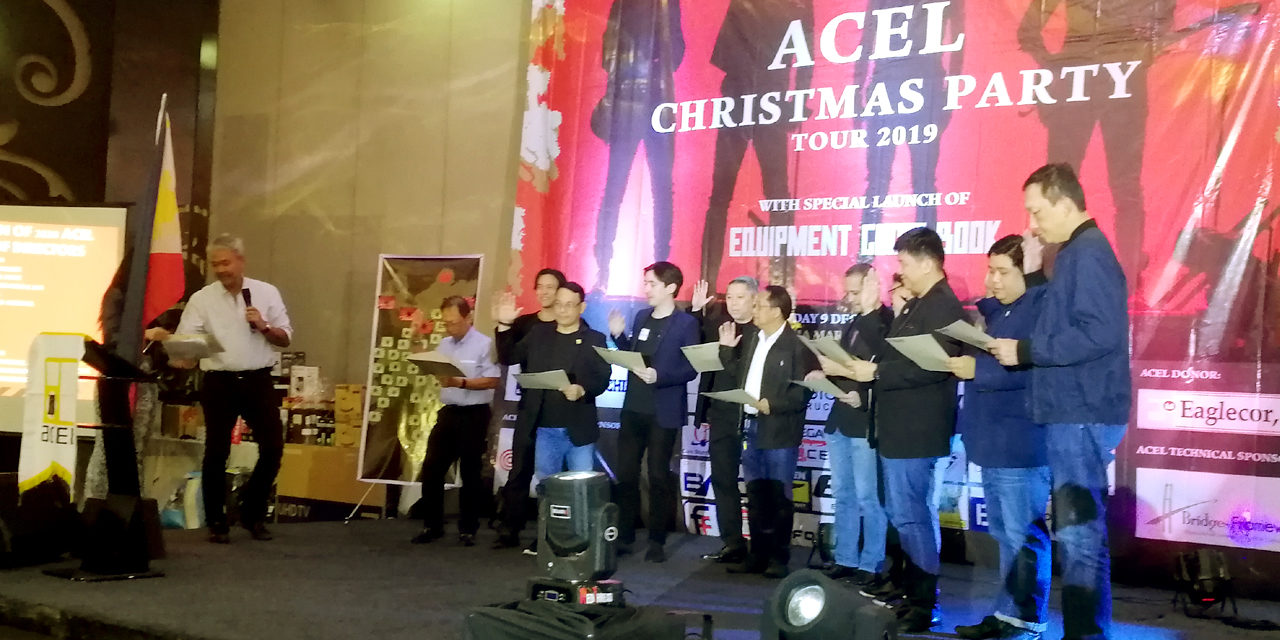 The Association of Carriers and Equipment Lessors (ACEL) closed its 2019 calendar of activities with a Christmas party that was attended by 126 representatives and guests from its member-companies. Held last December 9 at the main hall of the Gloria Maris Shark’s Fin Restaurant in Greenhills, San Juan, the festive event, which featured several high points, provided a fitting cap for a year which was similarly marked by a number of milestone accomplishments for the Association.

The event was also highlighted by the official launch of the 26th edition of the ACEL Equipment Guidebook. Advance orders were taken for this much awaited industry handbook that will be released in the first quarter of next year.

A product presentation by Inframachineries Corporation, the Christmas party’s major sponsor, provided yet another high point to the occasion. Laurice S.D. Ambrosio, ACEL executive director, also used the occasion to warn members about phishing/whaling emails coming from some unscrupulous parties who make them appear to be official communication from the Association. To enable members to check if these emails are legitimate or not, she gave them the names of the staffers who make up the ACEL Secretariat, their phone numbers and email addresses. She likewise advised members to be vigilant about the various threats proliferating in cyberspace and not to give out any vital information online.

But this ACEL gathering was not just about business. After all, it was a party and this was made very clear beginning with the event’s U2 theme and the glittery decorations that were created by Krizia Kaita A. Jimenez, to the spirited emceeing of Maria Gianna Margarita Llanes who served as the evening’s host, all the way to the lively music provided by the Red Thread Band. And then, of course, there was the highly anticipated raffle draw where Ed Placido of Global Heavy Equipment and Construction Corporation and Gabriel Serquiňa of Civic Merchandising Inc. emerged as the lucky grand prize winners. Ed won a reclining chair, while Gabriel took home a 50-inch Samsung television set.

The party ended with the announcement of more winners. Abi Mancilla of First Philippine Skills and Equipment Testing Corporation and Ivan Garcia of Livan Trade Corporation took the prize for sporting the Best U2 Costumes – a staycation for each of them at the Solaire Resort and Casino. Via Angeles of Olympic Engineering and Sales Corporation and Noy Benedicto of Benedicto Steel Corporation topped the “Guess that U2 Song” competition and for their winning effort won Glenfiddich Whisky.