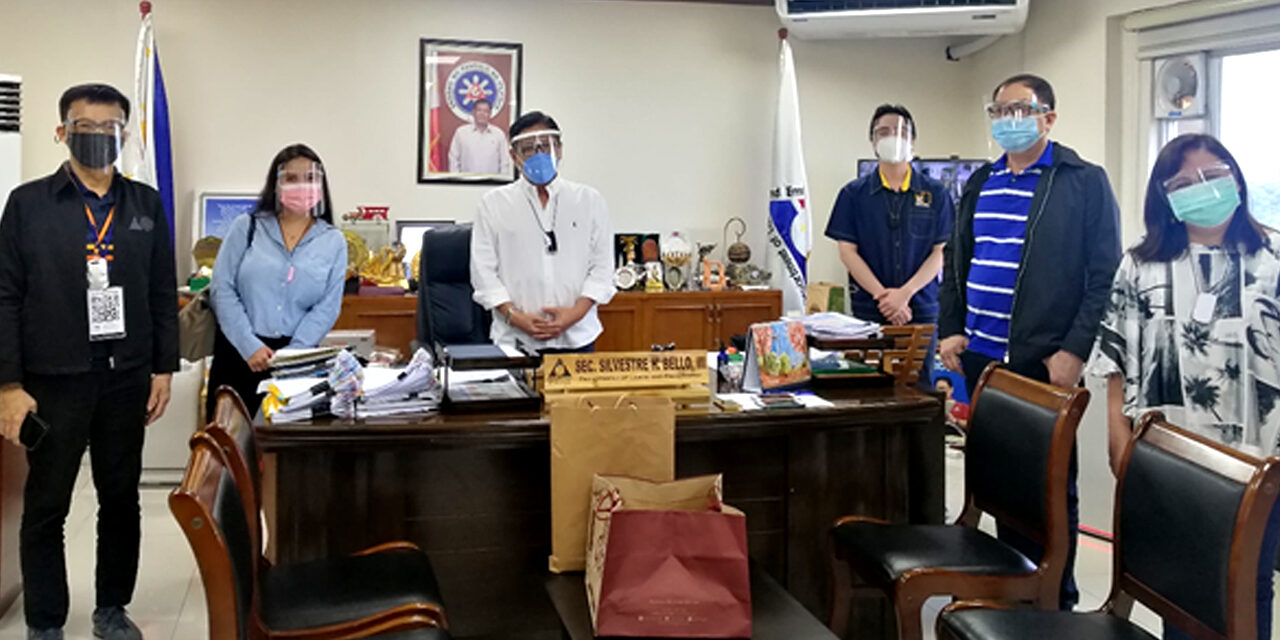 The Association of Carriers and Equipment Lessors (ACEL) recently stepped up its support for the
campaign against COVID-19 by donating rapid coronavirus test kits to five government institutions.
Last September 16, 2020, ACEL President Eduardo P. Trinidad, First Vice President J. Eladio L. Angeles
and Second Vice President Jonathan R. Perez, together with Laurice S.D. Ambrosio, the Association’s
executive officer, met with Engr. Toribio Noel L. Ilao, director of the Bureau of Equipment (BOE), to
personally turn over to him 120 rapid test kits. They also gave him a copy of the 26 th edition of the ACEL
Equipment Guidebook. The head of the BOE, an agency under the Department of Public Works and
Highways (DPWH), Ilao is one of the government officials whose congratulatory message is included in
the foreword part of the handbook.
Two days later, on September 18, Ambrosio brought ACEL’s rapid test kit donation to the Bureau of
Labor Relations (BLR) of the Department of Labor and Employment (DOLE). The 100 test kits were
received by Atty, Maria Consuelo S. Bacay, the BLR director.
On September 24, Ambrosio went to the Construction Manpower Development Foundation (CMDF) to
turn over 40 COVID-19 rapid test kits. Neolen Pereira, a staff member, received them on behalf of the
foundation, an attached agency of the Department of Trade and Industry (DTI). Later that day,
Ambrosio, this time accompanied by Fresyl G. Sunga, a member of Ambrosio’s ACEL Secretariat staff,
brought the Association’s donation to the Pasig, Mandaluyong, Marikina and San Juan (PaMaMariSan)
District Office of the Technical Education and Skills Development Authority (TESDA). The test kits, also
numbering 40, were turned over to District Director Rosalinda B. Talavera.
Finally, on September 25, Director Juan Lorenzo Luis DC. Banson, ACEL’s Corporate Social Responsibility
Committee chairman, accompanied by Ambrosio, went to the DOLE’s head office in Intramuros to bring
110 rapid test kits. The Association’s donation was personally received by Labor Secretary Silvestre H.
Bello III. The secretary was also very happy to receive a copy of the latest edition of the ACEL Equipment
Guidebook. His congratulatory message is likewise part of the handbook.
Donations in support of the campaign against COVID-19 have been an integral part of ACEL’s corporate
social responsibility program since the outbreak of this global pandemic. Last April 22, the Association
donated 200 face shields and 16 hazardous materials (hazmat) suits, more commonly known as personal
protective equipment (PPE), to the Providence Hospital located on Quezon Avenue in West Triangle,
Quezon City.
The following month, on May 23, 2020, it donated 16 incubation boxes to the Research Institute for
Tropical Medicine (RITM). Incubation boxes are transparent cubes made of plastic that are being used in

many hospitals around the world to provide healthcare workers with additional protection when they
perform endotracheal intubation, a necessary procedure for infected new COVID-19 patients who suffer
respiratory failure. Following the design pioneered by a Taiwanese doctor, two holes are cut on one side
of the box so that when it is placed over the head of the patient, doctors can insert their hands through
these holes to perform the procedure while being shielded from the patient’s respiratory droplets.