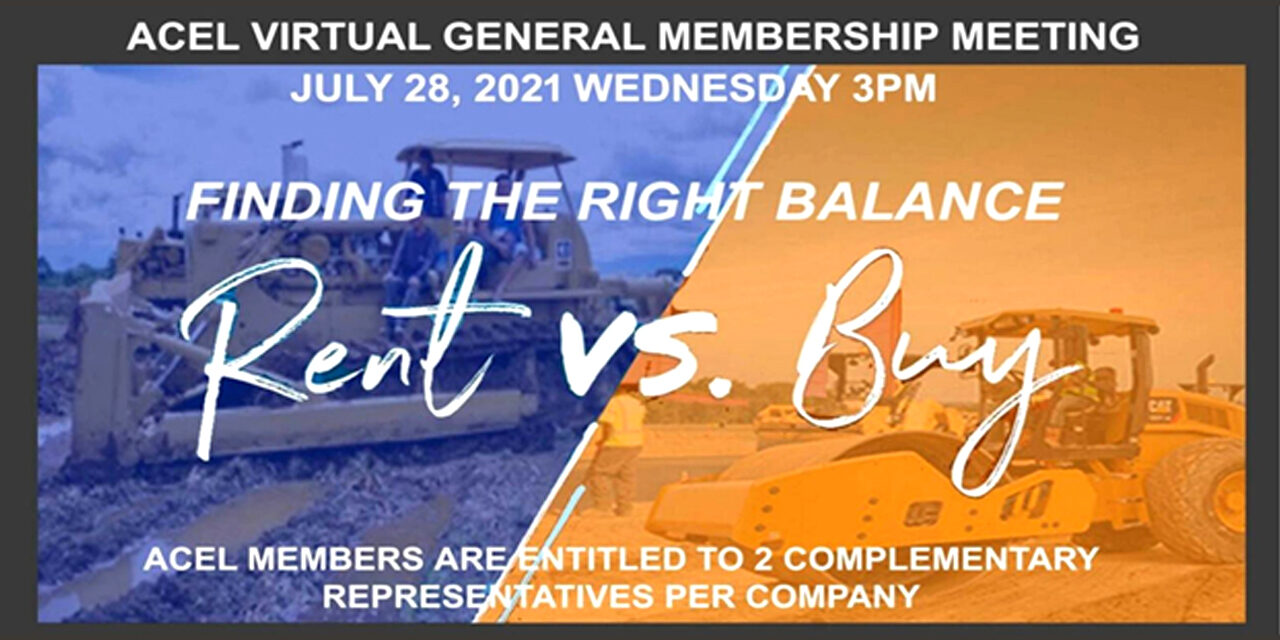 A panel discussion – the first ever to be held by the Association of Carriers and Equipment Lessors (ACEL) – highlighted and definitely enlivened the Association’s third Virtual General Membership Meeting (VGMM) that was held last July 28, 2021.

Conducted online via the Zoom platform, the meeting attracted 72 attendees who eagerly followed the panel discussion that focused on the topic “Finding the Right Balance: Buy vs. Rent of Equipment.” Sitting as panelists were Peter Pancho, the equipment and plant manager of C.M. Pancho Construction Inc. and an ACEL past president; Dino Selma, chief operating officer of Anseca Development Corporation and president of the Association’s Cebu Chapter; Onofre Banson Jr., president of Monark Equipment Corporation and an ACEL founding member who has also served as president; and Herman Cervantes Jr., vice president of the equipment division of Bormaheco Inc. and another ACEL founding member.

Jovito Basilio of Basilio Rentals & Sales Corporation and Noel Flores of San Guillermo Construction & Trading Corporation moderated the very lively panel discussion and the equally spirited open forum that followed where questions from the online audience were answered by the panelists.

While the topic was naturally of great interest to ACEL members, the panel discussion format certainly added to the excitement as it allowed for a free and animated exchange of opinions, perspectives and experiences. “The attendees were into it right from the start and they asked a lot of insightful questions,” Basilio noted.

“The feedback from the attendees was very positive, with many saying the panel discussion was very informative,” Nicole Warren, Pacific Orient Winds Corporation assistant vice president and ACEL director who chairs the Association’s fellowship committee, said. “The panel discussion was a great success and ACEL will continue to explore new formats such as this to provide relevant information to our members.”

The meeting also featured a product presentation from one of the sponsors, Trelleborg Marine and Infrastructure, a United Arab Emirates-headquartered provider of highly-engineered polymer solutions for the shipping and ports industries. This presentation was followed by the induction of a new ACEL member, KCD Builders Corporation, a Filipino-owned design-and-build construction company based in Santa Rosa, Laguna.